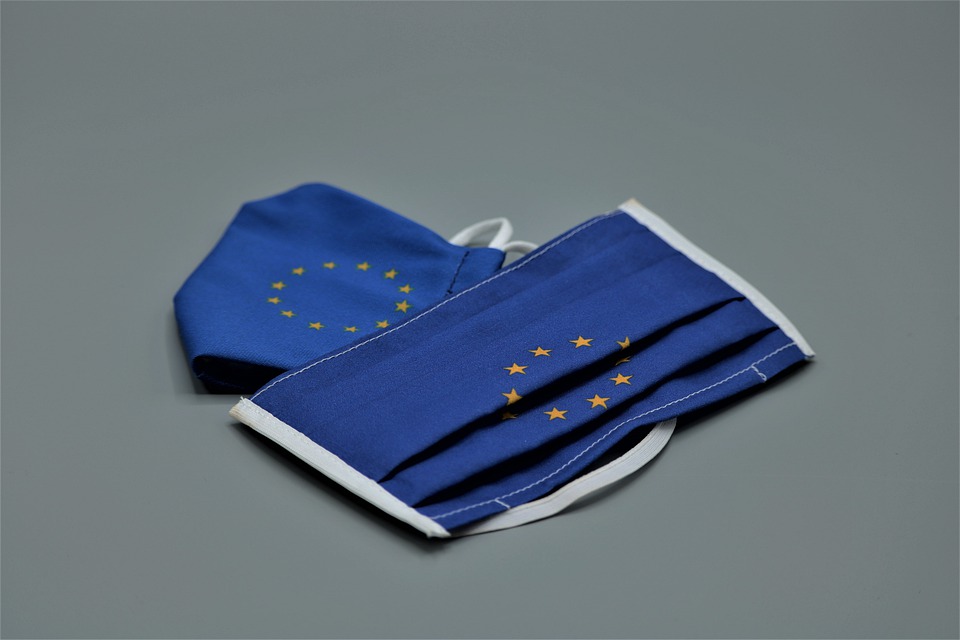 The recent Covid-19 pandemic not only effected national states, but also had an important impact on the European Union. It brought back old debates on European versus national identity leading to headlines about a ‘European Identity Crisis’. Inspired by these current discussions, our European Studies and International Relation MA students wrote on different aspects of European identity.

In this special blog series, we would like to share with you four research papers submitted in the course of the seminars ‘Special Topics in European Studies’ and ‘Political Sociology’. While our first three contributions deal with European identity in the context of the recent pandemic, the last explores the connection between European identity and cinema.

The blog series starts with Sude Ünal’s research entitled ‘Re-thinking European Identity During the Covid-19 Crisis’ submitted for the seminar ‘Special Topics in European Studies’ in the fall term 2020.

The views and opinions expressed in this blog entry are those of the authors and do not necessarily reflect the official policy or position of Istanbul Bilgi University and European Institute.

Who are the Europeans? European identity constitutes the construction of a cultural social structure, rather than genetic links. The existence and disclosure of European identity has been a topic discussed by social scientists and politicians for years. The Covid-19 outbreak re-flame the debate on European identity and solidarity, urging European Union institutions and member states to turn to the old difference of opinion on national vs. European identity and interest as if these concepts were at contrast with each other.[1] The idea of “unity, other than conflicting in the same continent”, which lies at the foundation of the European Union, should help this pandemic come through with solidarity and togetherness, rather than changing and unbundling the European identity for some economic or political benefits. While Euroscepticism increases in the Mediterranean countries, national movements might come to the critical point for the destiny of European Union. The crises can help Europeans to understand the importance of their cultural values, as well as lead to cultural conflicts among each other. The main burden will be on European citizens and politicians who will determine how the pandemic will affect their unity.

Does Europe Need an Identity?

In sociology, the debates have been focused on questioning whether a collective identity is needed to form a political and social union within society.[2] According to some sociologists, the answer is simply no. In case of Luhmann, if societies are kept together with systemic features, without resorting to individual action, members of society do not need a sense of attachment for social integration.[3] However, for some other scholars, building of identity is significantly important. For instance, Parsons’ point of view of “societal community”, which is defined by drawing a boundary anchored in the experience of its members, is a mandatory component of all societies. [4] This question has become a topic discussed by political scientists in addition to sociologists. Mainly, they focused more on positive responses and evaluated the impact of the concept of identity on societies. The legitimacy crisis is often described as identity crises in the political discourse. [5] As for the communities of the European Union, the phenomenon of European identity cannot be felt unless a comprehensive and significant solidarity is needed. According to Kohli, (cf: (Armingeon 1999: 236)) one of the main fundamental reason for European identity is that, societies could build a European identity of unity and feel belonging in order to overcome a problem that is not possible to cope with it on a national level. [6]

The fundamental declaration on 'European identity' adopted at the Copenhagen Summit in 1973 was the first concrete step of this strategy. The prediction of “European Identity” in the documents obviously reveals the understanding of institutional unity as symbolic identity. [10] According to the documents, most important values of European identity include the functions of law, human rights, social justice and even customs union and all other policies for cooperation.[11] After Copanhagen Summit, important steps have been taken to empower European identity and European culture as well as changing concept of Europeanism from only being a political unity. Common passport, flag, anthem and currency were important developments to encourage European identity. [12] Moreover, student exchange programmes and youth empowerment projects are also important steps towards the development of European identity and solidarity.

European Identity and Historical Transformations in the Case of Covid-19

According to the Eurobarometer, a majority of people in every European Union (EU) member state feel that they are citizens of the EU. Seven in ten do so at EU level (70%, -3 percentage points since spring 2019), while 29% say that they do not feel they are EU citizens (+3). [13] At the national level, the proportion who feel they are citizens of the EU varies from 91% in Luxembourg to 51% in Greece. [14] Despite these international institutions, globalization, freedom of movement, international marriages and relations, the concept of nationalism is still existing in Europe and is used as an instrument to be sceptic about European Union, with people’s fear of losing their own history, traditions and values. [15] It is a fact that in times of crisis people often struggle and unite with their national identity. To explain the changing dynamics, we can reference some historical transformations (the Cold War, the Euro crisis, and now Covid-19) that helped shape people's feelings, thoughts and actions. [16] It is unfortunate that in times of crisis, people often feel like they have to make a decision, which often leads them to decide between European identity and national identity. Substantially, such unity like the European Union offers a unique and comprehensive opportunity to overcome this situation together in times of crisis. However, the member states started to respond to Covid-19 crisis by their own national level actions from the beginning. These different levels of actions have led spread the corona virus rather than decrease the risk. For example, if all EU member states had common decisions for the entrance of Non-EU citizens in their border policies, the rate of spread of the virus could have slowed considerably.

Italy, one of the most negatively affected countries from the crisis, has repeatedly stated that it is being left alone by EU institutions, followed by a statement from the president of the European Commission that they "apologize to Italy on behalf of Europe." [17]  Particularly Mediterranean countries turned their eyes to Germany, which is one of the European countries that manages the crisis in best way. Indeed, Germany supported Italy and France by accepting Covid-19 patients from these countries. However, the financial burden of the crisis was still a big issue on the table, which led questioning the European Union and its meaning to the Italian citizens.

Italy has started Euroscepticism mainly after the Euro-crisis and migration crisis in the Mediterranean Sea. Eventually, as Covid-19 suffered a heavy blow and failed support from EU, the populist president Salvini's critical discourse of the European Union and the citizens' movements to burn the EU Flag increased rapidly.[18] European Commission has taken some important steps immediately. Some of the measures they have taken included suspension of regulations of the Stability & Growth Pact, allowing more flexible use of funds from the budget and amending rules that block state aid to national firms. [19] If we talk based on the numbers, EU Commission has prepared a programme to prevent businesses and workers affected by the pandemic to the tune of €100 billion. Moreover, the European Central Bank announced €750 billion Pandemic Emergency Purchase Programme (PEPP). [20] In this way, the European Union has demonstrated the importance and strength of unity and solidarity and being European with the measures taken.

Although financial support measures have been taken, it should not be forgotten that implementation is difficult due to the complex and supranational structure of the European Union. Despite the measures taken in Europe, such as the support of small businesses and workers from Europe, stress that the pandemic crisis can be dealt with in unity, some countries still continue to take national measures to address the crisis independently. For example, Viktor Orban uses the Covid-19 pandemic as an excuse to complete his authoritarian regime with signing the state of emergency law. [21] With the power of this law, which will ensure that his party has many powers at its monopoly, Hungary gets far from a democracy. However, Orban's decisions do not only bind Hungary at the national level, but these undemocratic decisions that are conflicting with fundamental principles of the European Union affect the entire unity. Moreover, these authoritarian steps also increase populist and nationalist rhetoric in other member states. The President of European Council, Ursula von der Leyen, says that "the only effective solution to the crisis in Europe is one based on co-operation, flexibility and, above all, solidarity"[22] The European Union can only overcome this situation by instilling in all citizens the fundamental values of the Europe and its European identity.

Identity in society is a concept that has been debated by sociologists and political scientists for many years and holds different views. However, in unique and supranational entities such as the European Union, the construction of the European identity is necessary to increase unity and solidarity and to fight against social movements. Adopting European identity as it belongs alongside national belonging, will be a major factor in addressing social crises, especially for the younger generation. The euro crisis, the migrant crisis and now the Covid-19 pandemic will be more severe if the union is not felt, especially in countries like Italy, which feel left alone in every crisis. This will result in a shift away from the European identity and clinging to national values. As we could see in the example of Italy, the movement of burning the European flag has shown that in such crises, if the importance of European identity and steps are not taken for the benefit of the Union instead of national interests, nationalism in the member states increases and the reliability of the Union is shaken. While crises must have been a great opportunity to demonstrate the strength of the "European" identity of the European Union, it has been misinterpreted by populist leaders and individualist politicians. While the European Commission's apology from Italy on behalf of Europe and the preparation of an extensive economy package eased the tension, it did not prevent the emergence of democracy crisis in countries ruled by populist leaders such as Hungary. In European countries, where nationalist currents are rapidly spreading and populist leaders are taking over, authoritarianism and democratization are dragging the European Union into serious crises not only on a country basis but also on an international level. It is precisely for this reason that the construction of the European identity has great importance in supranational institutions such as the European Union. Therefore, the member countries should have a common understanding and should take similar steps, particularly in case of crisis such as a pandemic. To eliminate the sense of belonging in the Mediterranean countries, perhaps more effort should be made by the European Union for promotion of European identity, and it should not be clearly shown that there is no privileged side and every member country should share the burden more equally. It should be noted that crises are temporary and cause deeper wounds in some countries. If European countries are more equally affected in such cases and consider Europe's sovereignty, they will not experience a crisis like Brexit again and they can engage in a more comprehensive struggle in larger and alarming crises such as the climate crisis. Another consequence that the European Union will draw from this pandemic crisis will be that all member states should be encouraged to work with similar health policies and capacities. Improving health and health staff capacity is one of the most important steps, in order to provide equal services to all European citizens. If EU would like to strengthen the European identity, for people to move beyond the national differentiation of European identity, all European citizens must be threatened equally or/at least similarly within the Union.