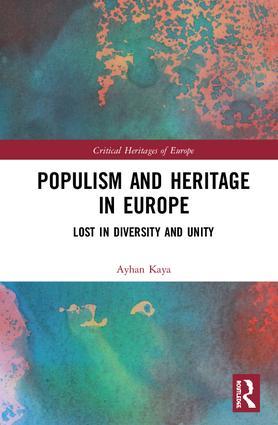 Populism and Heritage in Europe

Lost in Diversity and Unity,

Populism and Heritage in Europe Lost in Diversity and Unity

Populism and Heritage in Europe explores popular discourses about European and national heritage that are being used by specific political actors to advance their agendas and to prevent minority groups from being accepted into European society. Investigating what kind of effect the politics of fear has on these notions of heritage and identity, the book also examines what kind of impact recent events and crises have had on the types of European memories and identities that have been promoted by the supporters of right-wing populist parties.

Based on qualitative fieldwork conducted in six countries, this book specifically analyses how anti-European identities are being articulated by right-wing populist individuals. Providing an analysis of the manifestos, speeches and official documents of such parties, the book examines how they instrumentalise xenophobia, Islamophobia, Euroscepticism, globalisation and international trade in European spaces to mobilise the masses hit by financial crisis and refugee crisis. Drawing on in-depth interviews with the sympathisers of populist movements, Kaya provides some insights into the main motivations of these individuals in resorting to nativist and populist discourses, whilst also providing a thorough analysis of the use of the past and heritage by such parties and their followers.

Populism and Heritage provides a unique insight into one of the most contested trends of the contemporary age. As such, the book should be of great interest to those working in the fields of heritage studies, cultural studies, politics, sociology, anthropology, philosophy and history.

Ayhan Kaya is Professor of Politics and Jean Monnet Chair of European Politics of Interculturalism at the Department of International Relations, Istanbul Bilgi University; European Research Council Advanced Grant Holder; Director of the Jean Monnet Centre of Excellence; and a member of the Science Academy, Turkey.

The Critical Heritages of Europe series seeks to explore the cultural and social politics of the European past in the present. Bridging theoretical and empirical research, the series accommodates broad understandings of Europe – a shifting and historically mutable entity, made both of internal tensions and exogenous encounters, re-imaginings and influences. ‘Heritage’ too is taken as an expansive paradigm, made in myriad practices where the past is valorised for the present, from folk traditions to museums and memorials, the management of historic sites and traditions, and everyday matters such as education, political discourse, home life, food consumption and people’s relations with place.

Books in the series engage with European heritages in critical times – in all senses – when Europe and mobilizations of its heritages and memories are called upon to solve problems, and when contests over the meanings of the past are part of wider social and political relations and tensions. Heritage practices are variously informed by civil and uncivil visions, the politics of difference and co-presence, difficult pasts, relations with the ‘outside’, borders, margins, and migrations. Critical questions include: